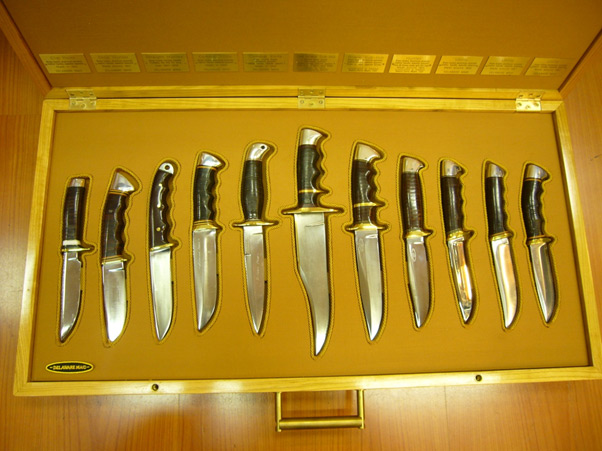 Nothing happens by chance…

If Art is the arm, the knife is the index finger that shows us the way.

Modern Knifemaking is great art… it opens the stargate, joins the ends in a circle, eluding time and space. “OF ALL THINGS THERE’S A BEGINNING, AND NOTHING HAPPENS BY CHANCE…

As I’ve been loving knives since my childhood, in 1992 I joined the historic Frinchillucci gunstore staff, whose special environment immediately conquered me. The Frinchillucci family created the store in 1871 and has always been managing it. Since I’ve always been a great lover of history, I felt flattered to have the opportunity to tread the same path as the previous five generations of Frinchillucci family. At that time, the furniture still reflected the golden age of the pigeon hunting and shooting; there was so much wood all around, hunting trophies, pictures… and the study of the owner, Italo Frinchillucci, was actually a living room where you could kind of hear the echoes of the stories told by all the customers over the years and, curiously, almost paradoxically I dare to say, all the weapons displayed, from shotguns to rifles, from pistols to revolvers, they didn’t evoke a feeling of coldness but, on the contrary, everything was very warm and cosy. What impressed me most were the two beautiful display cabinets full of knives with fixed or folding blades. Today, after twenty years, I made of my ancestral passion my profession and I’m happy about it. But nothing happens by chance and today, more than yesterday, I’m even more persuaded that “modern knife-making is a great Art”, because in the blade that goes with the man since always, you can find, clear and pristine, the pure concept of independent philosophy.

KNIFE AS ART OBJECT
The word “philosophy” comes from the Greek (philos and sophia) which literally means “love of knowledge” but, even if through the centuries many people have tried to answer the question “what is philosophy?” probably a real definition does not exist. Platone used a beautiful expression to define philosophy: he wrote that philosophy is the daughter of wonder. It’s the curiosity, which means not to accept things as they are but to try to understand them.
It’s the game of “why?”, “what?”, “what for?”.

About 2300 years later, Stanley Kubrick in his “2001: A Space Odyssey” tried to explain the indissoluble bond between man and time and space, and answers to those questions by showing that philosophy and religion are not so different because they both lead us to God; Kubrick shows the hominid that learns to use of an object, a bone, which suddenly becomes a weapon for dominating and conquering; in the following sequence spacecrafts are orbiting around the Earth, then the main character, old and dying, rests on a bed in a white room, still amazed by the mystery of the black monolith, and figures out the Earth as a baby who is observing it from his mother’s womb. Kubrick made a thousand-year leap and reset the concept of space-time, representing the whole Universe in an infinitesimal space.

These two examples made me realize that love for knowledge is the spark that rushed the Homo at the knowledge of Thought; and still today, as tomorrow, it will go on being with us as an invisible line, that breaking the silence in an endless run, connects Man with the Infinite. Philosophy is timeless.

It has no beginning (ab aeterno), no end (in aeternum), it’s everything, it’s nothing; it’s not science, but it’s the origin of the wish to know the origin of science itself. It is the chaos, and the tangible proof of its existence is Art, its real brawn, because in Art conscious and subconscious brain activity are one thing; it materializes thanks to the creativity of the Genious, which is the way the Man protracts the creative activity of God.

To end up this preamble I have to specify that even if I tryed to matematically analize these ideas, I probably will never find anything sure about the word “Philosophy” and its relation to Art; nevertheless I can figure it out for myself as a Whole (before and after, positive and negative, visible and invisible, etc.). Art is the instrument which allows the genious to catch and crystallize for just one moment, its real meaning: man, in his endless pursuit, inexorably subjected to the flow of time and prisoner of space, has always been fighting vainly, searching for answers, but this keeps alive; and his work, which is nothing else than pure philosophy, when it becomes art, stops the time and hovers, reaching the truth, the Absolute. If Art is the arm, the knife is the index finger that shows us the way. But what is a knife actually? The etymology for the word “knife” comes from the Latin “cultellus”, diminutive of “culter” (ploughshare). Generally, it consists of a blade with a point and one or more sharp borders fixed to the hilt. Blades have been used since Stone Age, the dawn of humanity, as utensils and weapons; anthropologists believe that the knife is one of the first tools deviced by man to survive. From the beginning till now man could evolve thanks to this invention. Even free will is due to the conception and the use of this tool. 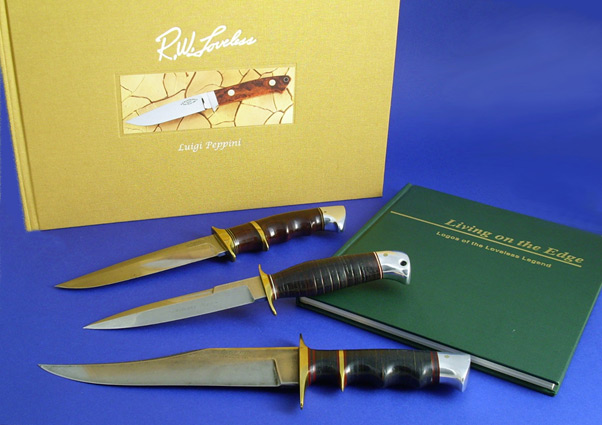 So, back to where I started from, modern knife-making is Great Art because when the genious, conscious or not, through the study of the shape, the materials, the balance, turns a simple object, just like a knife, into a work of art, it opens the stargate and that endless line that man and his philosophy have always been running along rolls on itself, joins the ends in a circle, eluding time and space, keeping the Whole inside. Thanks to cutler William Scagel (1875-1963) called “the visionary”, we know the origin of modern knife-making; he has created a stardard that became common to almost all the modern knife-making styles. Some decade later the young Walter Doane “Bo” Randall, Jr. (1909-1989) through his creations, during the 40’s, looked for the ideal hunting and/or fighting knife. By the way, the one who, in the mid-50’s, made of the knife-making what you can actually call “modern art” was Robert Waldorf Loveless (1929 – 2010), better known as “The great Bob”. A true legend.

THE INTENSE LIFE OF LOVELESS
Born in Warren, Ohio in 1929, at the age of 15 Bob Loveless left his home and joined the Merchant Marine pretending to be older than his age. Anyway, during wartimes, it was not uncommon for young boys to enlist to have the opportunity to see the world.

After the war Bob joined the Army Air Corps and spent about two years as an operator at the control tower in Guam and Iwo Jima. 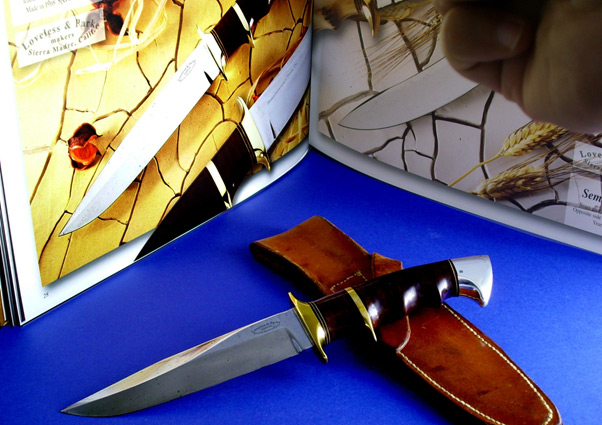 In the early 50’s he came back to work in the Merchant Marine. One day, during he was on travel, while he was walking around New York, he noticed some Randall Knives in a shop window of the Abercrombie And Fitch store. He was attracted by those knives but even more by their high prices and by the success that Randall was enjoying; so he decided to buy one of the knives. But when the scornful salesman said that it was necessary to wait about nine months before having it, Bob didn’t want to wait so long, so he decided to make his own knife by himself. He was convinced that it couldn’t be that difficult to make a good knife and he was persuaded that he could make it even better than the knives he had sawn. When he returned on the ship to forge his first knife, he “unconsciously” made a change to its future: he was actually living the American dream. A few weeks later he returned to the Abercrombie And Fitch store with a sample of its creation and the Director recognized his great talent and immediately ordered 3 knives for $14 a piece. After they received the first three knives, Abercrombie and Fitch made a larger order to Bob (about 50 knives of different kinds): this marked the real turning point for this man and all he was able to do in 50 years of history. In 1969, L oveless became a full-time knife maker and in a few years he used to sell more knives than he could make; but, unlike Randall, he didn’t never speed up or change the production process. Bob always continue to make his knives by hand. He used to have many assistants and students over the years who are still considered among the best knife-makers in the world, but no one was able to create such beautiful object like he did. 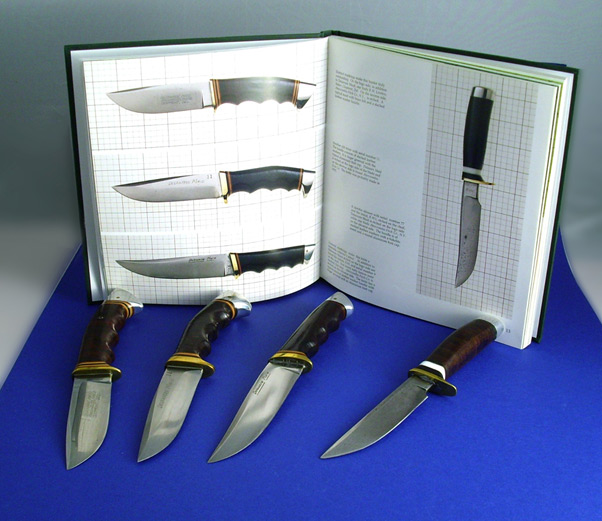 BIRTH OF A LEGEND
In 1970 Bob, together with A.G. Russell, became the founder secretary of the biggest association of knives manufacturers in the world, the Knifemakers Guild, that today has hundreds of affiliates. Thanks to his work, today there are dozens of thousands of knife lovers and the boom goes on. It’s hard to focus on a single particular that would show how Loveless knives have something special, that goes far beyond from being a simple hand tool. As a matter of fact, his virtuosity shines in many ways, for example the clean and incisive design.

By all means, Bob probably had a sixth sense in looking for the perfect ergonomics in its creations. Undeniably his enigmatic knives are eternal and perfect. For this reason, when you look at this special collection that comprises the blades from the very first period of Loveless production and whose commercial value is estimated around five-hundred-thousand euro, you realize that these knives are the only ones in which you can find the primordial spark of pure and absolute genius, the real source of the modern knife-making, although they look more simple and raw than all Loveless later creations. These knives were marked with the word “Delaware”, first, and “Sierra Madre”, after.

There are only few original pieces left of this collection, maybe a dozen in all, and we can still admire them thanks to the greatest collectors all over the world. The American Al Williams has searched, bought and stored them with care and wrote the famous book: “Living on the Edge”. But the most beautiful Loveless Knives collection in the world, gathered during 20 years of big investiments belongs to Italian Luigi Peppini.

In the preface of his book “R.W. Loveless”, Peppini wrote that the knife in all its forms has always been a great attractive to him, and has been an integral part of his profession for many years (he was the managing director for the Montana Cutlery Inc.). But, after he met Bob Loveless, knives became his passion for collecting. He was never really satisfied of his collection (as it happens to great artists) so he purchased a considerable amount of knives, and nothing can show better the path, the improvement and the creativity of the person who focused his genius on the art of creating knives than admiring this collection.
Today, nearly sixty years have passed since Loveless decided to create his first knives in Delaware and we can say that the market has been in such a constant evolution to generate a hundred thousands of fans all over the world, who with their passion they have strongly contributed to create and consolidate hundreds of industries, thousands of artisans and a few real Artist, each one able to create objects that arouse emotions.
But, again, nothing happens by accident.” 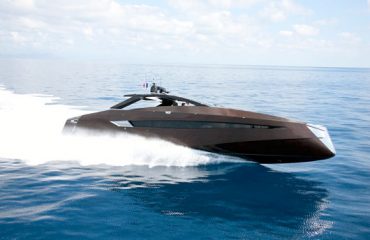 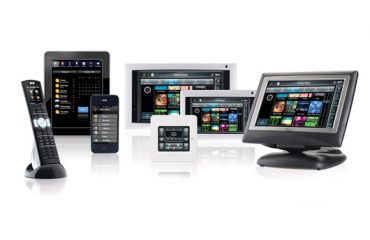 More to see from galTECH at Big Boys Toys 2013 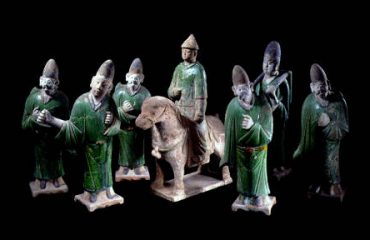